Do Pantry Moth Traps Work: All you Need to Know

Pantry moths live for one purpose: breeding and reproducing. They seek out the best breeding ground for their larva.

This is why they infest the kitchen and lay their eggs in food so that the larva can have something to eat when they hatch. They are hard to miss.

They are also easy to exterminate, but it takes the right kind of moth trap to get the work done. It also takes some time and a lot of cleanliness to eliminate the flour moths. The question is, do these traps work?

Yes, pantry moths do work if they are placed consistently in the right locations where the months lay their eggs. By limiting the moths from laying their eggs, the traps help break the life cycle of the months and thus reduce their population. If used consistently over a long time, the eventual result is getting rid of their existence.

To understand how effective they are and how they work, let’s delve more into understanding what these creatures are, and how do they live.

What is a Pantry Moth Trap?

They are also coated with a sticky adhesive that traps the moths once they come into contact with the trap.

Pantry moth traps are usually non-toxic, and some are organic. They are usually viable for two months. However, certain factors vary from brand to brand.

What are Pantry Moths Attracted To?

Pantry moths respond to many stimuli. However, they are primarily attracted to dry foods such as flour, cereal, grains, nuts, dried fruits, and more. This is why these pests flock the kitchen. In fact, male pantry moths do not have mouths – the only reason they infest food in your pantry is to breed with the females who got there first. Reddish-brown pantry moths are also attracted to light.

How Do Pantry Moth Traps Work?

Pantry moth traps come in different types and designs. As mentioned, most of these traps rely on artificial pheromones designed to mimic natural pheromones produced by female pantry moths.

The scent attracts male moths seeking to breed. The traps are usually coated with sticky glue that traps them. Read a list of 12 traps and sprays that kill moths and we found them effective enough.

Therefore, they work by preventing breeding and eventually inhibit the laying of eggs. This breaks the life cycle of the moths as their young ones do not get laid.

The traps are not laced with any toxic substances, so the moths simply get stuck – they can be disposed of humanely or simply left to die.

Some pantry moths use light as a lure instead of female moth pheromones. The light source is positioned inside an enclosed space. Male reddish-brown moths follow the light and are trapped in the enclosed space with no way out.

The trapping is only half of the genius behind pantry moth traps. The fact that these traps only lure male pantry moths means that they are not entirely effective as it is the females that do the real damage.

However, by attracting male pantry moths, these traps prevent breeding and decimate the moths’ future population.

These traps are not effective against larvae either – this is a problem since it is the larva that feeds on your food and contaminates it. As such, pantry traps are not sufficient to get the job done.

This is why it is always necessary to undertake a complementary approach if you wish to exterminate all pantry pests from your house.

Pantry moth traps may not be effective against moth eggs and larvae, but there are other effective solutions. One effective alternative is using spray and repellents.

These products contain substances that are toxic to the larvae and female pantry moths. They either kill the larvae on the spot or drive them away.

If, however, you are not open to using sprays and other toxic substances, then perhaps you should do it manually. This will take a lot of cleaning and disinfecting. Here is a step-by-step guide on how to go about it:

1. Clean Out the Pantry Pantry moths are not picky about the foods they infest.

As such, it may be necessary (and it is recommended) to clean out the whole pantry.

Take out all the food items while placing them in a secure container.

Additionally, look out for larvae sacs and web that may house pantry moth larvae.

Sometimes pantry moths burrow deep into flour, cereal, and other foods. They are difficult to spot this way. As such, you will need to inspect all the food items individually. Look for holes in the packages as this is how the moths infest food. Additionally, look for clamping in flour and subtle movement under the surface of cereals and other foods.

Additionally, you should get rid of all uncovered containers and packages – it is recommended to use plastic containers for storage as the moths cannot burrow their way through the plastic.

Getting rid of the infested food is not enough. The pantry moths may leave pheromones that will only serve to attract more pantry moths later.

As such, it is prudent to vacuum the pantry and surrounding furniture and surfaces. Make sure that you get every inch, including between the shelves.

It is also important to disinfect after vacuuming. You should use a solution of vinegar and water to wipe the surfaces clean. The vinegar will not only get rid of the pheromones and bacteria but also prevent moths and other pests from infesting your pantry later.

4. Leave the Pantry Empty for Some Time

Pantry moths are driven, and if there is food in your pantry, they will try to find a way to get to it.

As such, you should leave the pantry empty for a day or two after cleaning it out. Store the food elsewhere and keep a tight lid on it to keep the moth out.

Keep the pantry aerated, and when you finally restock it, keep a close eye on it in case more pantry moths show up.

However, clothe moth traps use a distinctly different type of pheromone unique to the species. The moths do not detect pheromones from other species.

However, the mechanism is similar: first, the moths are lured by the pheromones and then they are trapped on the sticky surface when they come into contact with the trap.

Again, clothe moth traps only work against male adult moths. As such, it is necessary to use other methods to get rid of female moths and larvae. Clothe moth larvae are especially destructive as they chew away at fabric for nutrition.

How Do I Tell Whether the Pantry Moths are Gone?

As mentioned, pantry moths often burrow deep into the foodstuff. This may make it difficult to tell whether or not they are gone.

It is hence important to get every single moth and larvae when cleaning up. Make sure that you inspect each food item thoroughly. When you are keen, you will notice them and even see their eggs laid on food, especially flour and grains. This is the reason why they are also called by the names of flour months or grain months.

It may also be necessary to get rid of all the food to prevent re-infestation – the moths may have infested the food at the store in some cases, so it is important to check your purchases well before checking out from the store.

Pantry moths may be gone for now, but they may show up again later. As such, you should monitor and inspect the pantry periodically for some time after restocking it. It would also be prudent to take precautionary measures to keep the moths out.

Pantry moths are not only repulsive but also destructive. If left to breed, they will multiply and spread to other areas of your kitchen. As such, you should get rid of them as soon as they infest your pantry. And one of the ways to exterminate these moths is by using traps.

So, do pantry traps work? Well, they do work but they are not entirely effective. As such, consider all options on the table as long as the moths are exterminated. 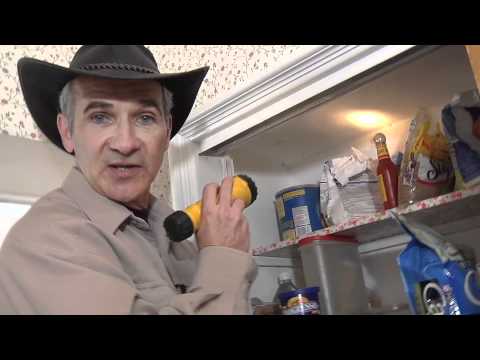