Blocked sinks are among the most common household problems. More often than not, homeowners neglect their drains. As a result, there is a regular need to double the kitchen sink drain and sometimes it still has standing water.

They do not maintain well and so at some point the kitchen or bathroom sinks get partially or fully blocked.

When this happens, water starts to drain at a frustratingly slow rate, and eventually the sink fills with dirty standing water. A clogged sink with standing water and debris floating in it is one of the ugliest things in any house.

What causes the double sink drain to get clogged?

As such, the kitchen drain is exposed to a wide range of matter that can lead to blockage, including;

How to unclog a double kitchen sink drain with standing water

The following are the 5 methods we have tried and tested to unclog the sink drain with standing water still in;

Before we delve into it, let’s explore the tools you will need. You can unblock a double kitchen sink drain with stagnant water using standard household home maintenance tools.

The tools you will need may include

With the tools ready, it’s time to roll up your sleeves and get down to work; If the sinks are full of water and waste, clear up the trash before attempting to resolve the problem.

Wear rubber gloves and remove all the food particles and other matter covering the drain.

You may be pleasantly surprised that removing the waste by hand is enough to enable the water to drain by itself.

Should that not work, you will have to proceed to the next step.

If it is still, you will have to remove it yourself. Using the Bucket, a plastic cup or any other vessel, scoop the water and remove it from the sink.

When the sink is clear, you can try to unclog the drain using any of the following methods;

This is one of the easy, tried and accurate ways to unclog a sink. Place the plunger over the drain such that the suction cup forms a vacuum. Now use the handle, pushing it in and out, to move the obstacle towards the Plunger.

The pressure formed by the airtight seal causes the blockage in the pipe to move back and forth.

A plunger breaks down the obstruction and clears the drainage pipes.

Pay attention to the sounds coming from the drain.

When you hear empty sounds in the pipe, know that the blockage is cleared.

However, you should be patient when using the Plunger because it may take a while before you get results.

For quicker results, you can purchase a small unique sink plunger for clogged sinks. A good example is the Luigi Sink and Drain Plunger that is suitable for the kitchen sink.

Such small plungers carry more pressure since the force used to push is distributed over a short distance between your hands and the sink.

You may be wondering what this is or where it is in your kitchen sink. It is the curved section of the pipe beneath the sink. Often, the P-trap gets blocked by food debris.

It is good to note that most clogging is caused by food stuck on sink, which should be removed.

You can remove the P-trap to clear up the drain. Make sure you rinse the pipe thoroughly.

Place a bucket under the P-trap and use the channel-type pliers to unplug it.

However, you need to be careful because once you remove the trap, a lot of water and trash will spill out.

At times, the obstruction occurs farther below the P-trap. To remove it, you will need a cable auger called a drain snake. It is a metal cable with a device at the end that you push into a pipe.

Since blockage can happen anywhere, you will have to remove some pipes under the sink to get better access to the clog.

Place the Bucket under the pipes to collect leaking water and use a wrench to remove the tubes. Feed the hook-like device into the drain and turn the handle such that the auger moves down the pipe.

Continue pushing until you feel resistance and then rotate the snake against the blockage.

The idea is to get the hooked end of the snake attached to the blockage in the pipe.

Rotating the snake will either tear the clog apart or remove it upon retrieval.

Also, you can clear the pipe by running hot water for a few minutes.

It is important to note that a drain snake is a tool usually used by professionals. Few homeowners have it at hand. So if your drain problem needs a drain snake, it is advisable to get help from a professional plumber.

This method is one of the easiest and often overlooked ways to remove debris in the pipes. If your kitchen sink drain has a disposal, you can try the disposal suction method to remove the blockage.

If both sides of your kitchen sink are filling up with water, clog up the sink drain on the side without the disposal. You can do this by firmly pushing down the drain plug to ensure a tight seal.

With the plug firmly in place, the disposal will act as a vacuum and clean out the obstructions in the pipes on its own. Try it and see if it unclogs your double kitchen sink drain even with its standing water.

This method is somewhat complicated but very effective in unclogging a double kitchen sink drain with standing water.

Use the Bucket or another vessel to remove the standing water and get access to the drain opening. Pour a cup of baking soda into the drain and use a spoon or any other tool to push it down into the sink.

Next, pour a cup of vinegar into the drain and use the sink stopper to cover the drain opening.

Doing this basically prevents the baking soda and vinegar from coming back out.

The mixture produces a strong chemical reaction that breaks down most blockages without damaging your pipes, unlike industrial cleaners.

How to prevent damaging sink trap connectors or pipes while unclogging

Using the wrong tools or methods can cause damage to your kitchen sink drain system. To avoid such an outcome observe the following;

Using chemical drain cleaners to unclog your sink can soften your plastic pipes and damage older metal pipes. These acid solutions can also cause personal harm to burn your skin and eyes. If you must use a commercial drain cleaner consider a biodegradable one. They are safer and protect your pipes.

If moderate plumbing fails to unclog your sink, don’t force the matter. Extreme pressure can damage the drain line connection, resulting in leaks or a ruined trap.

A drain bladder or a blow bag is a garden hose attachment that directly inserts into the drain. It uses water pressure to clear it. Sink drain traps are not permanently connected, and the pressure can lead to damage.

If your drain snake hits a clog, don’t forcefully pound at the blockage. It can damage your sink trap connectors or pipes.

Some people think that the additional pressure created by adding more water to the kitchen sinks will flush out the pipe. It will only make the matter worse.

Check out our guide on causes of kitchen sink draining to the yard and see some of the consequences of blockage in the drain.

While it’s true that you don’t always have to use a professional to unclog your sinks, at times, it’s the best thing to do. This is particularly important when unclogging a double kitchen sink drain with standing water.

You may not have the time for this tedious and unpleasant maintenance task, or it’s difficult, challenging to remove the clogging. In these cases, don’t haste to get help from a professional plumber.

Want to learn more, watch this 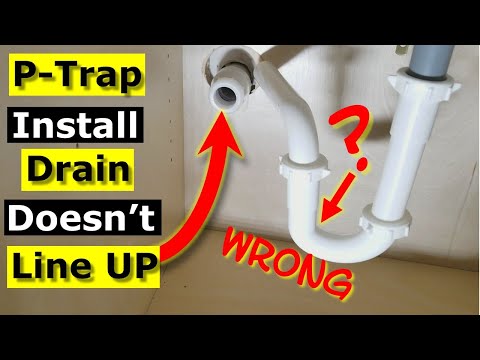